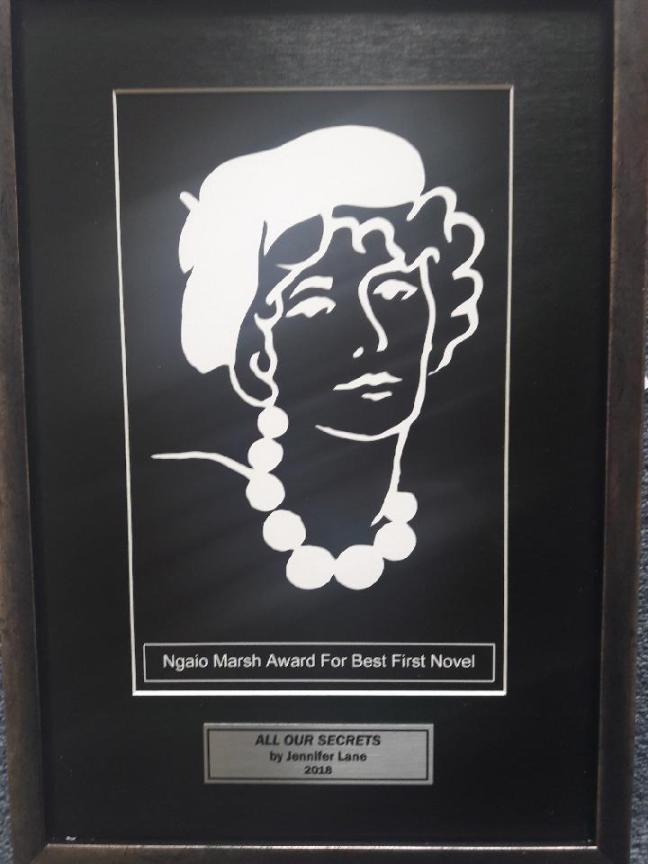 Earlier this month I was lucky enough to experience WORD Christchurch. The Ngaio Marsh Awards ceremony was part of the festival and the finalists were invited to read from their books in Murder in the Chamber. I jumped at the chance to escape for a weekend, meet the other finalists, be inspired by other writers, and get out of doing the weekly grocery shopping. I wasn’t expecting to win.

My hotel was next to the Piano Bar (home of most WORD events), which was fantastic for a couple of reasons: 1. I didn’t need to rely on the Google Maps lady to find the Piano Bar. 2.  Most of the festival’s writers were also staying there, so I felt like part of the scene. Every time I caught the lift or passed through reception, I saw someone I ‘knew’. They just didn’t know me.

Because I was part of the festival, I scored a writer’s pass, which meant not only did I have an important-looking ‘Writer’ lanyard to hang around my neck (though I kept it in my bag – I’m not a show off) – I was entitled to free entry to events. Helen Clark’s Women, Equality, Power event and her rockstar reception was a highlight, as was Motherhood, a conversation between Catherine Robertson, Emily Writes and Hollie McNish over the cries and gurgles of countless babies.

On the day of the awards, after sharing the hotel gym with a Booker Prize winner (sorry, had to squeeze that in – I won’t mention his name, but he was very polite, even apologising for his squeaky treadmill), I met my publisher, Penelope Todd.  This in itself was a momentous event: our first proper face to face meeting after ‘kind of’ knowing each other – through emails and the occasional Skype – for several years. Penelope has invested so much time and energy into All Our Secrets she deserves a multitude of awards herself. My win that evening was twice as rewarding with Penelope there to share it.

Next up was a Masterclass with award-winning Glaswegian crime writer, Denise Mina, whose book, The Long Drop, was the only upside of having spent the early hours of that morning propped up against one of my hotel bed’s seven enormous pillows (its size not only prevented me from sleeping, but forced me to question, for the first time ever, the length of my neck). The Long Drop (which is also, ultimately, about a neck, not an outside loo) is a gripping read. Denise’s course, too, was captivating and inspiring. Even though I was up for a crime fiction award I still felt like an imposter in a crime writing workshop, but Denise assured us that lots of authors write crime novels by ‘accident’.

Then, somehow, it was 5pm and time to meet the other finalists. We gathered in a room I can only recall as being green (and probably only because someone called it the ‘green room’). It was a huge buzz meeting people whose faces and books I recognised from social media, and to hear that many of us will get to hang out together at the inaugural Rotorua Noir festival next year.

In Murder in the Chamber I read about the first death in All Our Secrets – of Sebastian, the kitten – the most ‘crimey’ part of my book that didn’t give anything away (apart from, of course, poor Sebastian’s life).

Then, the awards ceremony: a happy blur, partly attributed to excitement, and partly to the pre and post-Murder in the Chamber pinot noir. Awards judge, Vanda Symons kicked off proceedings before inviting A J Finn (aka Daniel Malory) to present the award for the Best First Novel. I confess I didn’t know who A J Finn was; I just thought he was a hot American guy who must’ve written something. I now know that his book, The Woman in the Window, is the biggest selling book in the world this year!

Anyway, the hot American guy announced… “the Winner of the Ngaio Marsh First Novel Award is….All Our Secrets by Jennifer Lane.” I know these were his words because he later gave me the envelope that contained them. As for what I said when he handed me the microphone, I’m not entirely sure. I hadn’t wanted to jinx my chances by preparing a speech.

Denise Mina then declared Alan Carter the winner of the other, bigger, Ngaio Marsh Award (Best Crime Novel). We posed for photos, signed a stack of books, hugged everyone in sight, and I enjoyed a celebratory dinner with Penelope and her husband. It was a truly memorable night!

My only responsibility for Sunday was to meet Vanda and Alan at the Radio NZ studio for an interview with Lynn Freeman. Easier said than done. I got lost wandering through the construction site that is Christchurch’s CBD, even with the Google Maps lady bossing me around. Once I finally found the others, we realised we had the wrong address, so had to race a couple of kilometres back in the direction from which I’d wandered (despite Google Maps lady’s protests – she was ready to strangle me by then), but made it just in time. I find radio interviews slightly terrifying, and this one was live! Fortunately Vanda and Alan had plenty to say.

And that ended my magic weekend. Oh yeah, there were a few All Blacks at Christchurch airport. I only knew who they were because they were being accosted for photos (though their All Blacks outfits should’ve been a giveaway). I’d spent my weekend among celebrities – the night before I was practically one myself – so I wasn’t at all fazed. Though, I confess, I did take a discrete photo, just to pass the time. The photo was blurry (such was my discretion) and I think the friend I sent it to was equally unfazed.

It was then time to fly back to reality, motherhood and grocery shopping, but also to a normal-sized pillow, and with a very special souvenir squeezed into my suitcase:

Read more about the awards

Hear the radio interview (I haven’t yet)